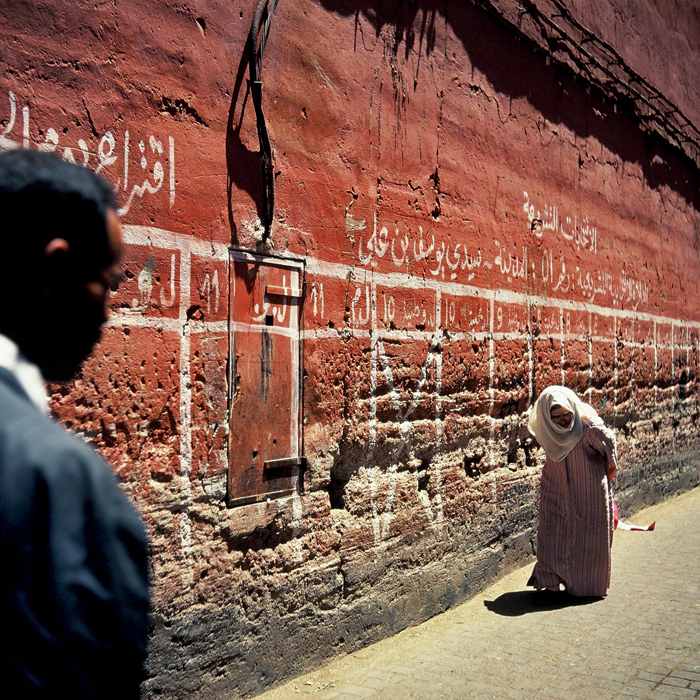 Marrakech in May. Before the searing heat, and the swelter of the Saharan summer comes, spring. It’s the perfect time to visit.

A little over a week in Morocco is nothing, as I found back in 2014, especially when you are travelling from the port of Tangier to the mountains and the imperial cities further south, then a day by train to Marrakech. It’s only when you’re there that you realise just what an enormous country it is.

Marrakech’s soul is a warren of bazaars. If your hotel doesn’t furnish you with walking map, you could spend countless hours trying to retrace your steps, past grinning shop owners and load-bearing mules, skulking cats and mounds of spices.

My final day, I had an entire morning to wander one last time around Marrakech. All I took with me was my Soviet Iskra folding camera, my light meter and a few spare rolls of 120 film.

After shooting black and white inside the covered soul, I headed out to a nearby local market, the Iskra loaded with expired slide film. Like any other rangefinder, the Iskra is fantastic for street photographer, thanks to an almost whisper-quiet shutter. It is a folding camera though, so it does tend to get a stare or two.

Near the market, the ochre walls were bathed in strong morning sunlight, covered in markings and Arabic script. A woman was slowly walking into the frame, head bowed, and hunched from age, framed in front of the wall’s rich colours. Just as I tripped the shutter, a man walked past me, hurrying into the picture. He didn’t spare me, or the old woman, as much as a glance. Thanks to the narrow aperture, he wasn’t in focus, but that seemed to only add to it. A looming shape, blurred and somehow menacing. What was supposed to be a holiday snapshot – something that would remind me of the heat and lights and smell of Marrakech – suddenly seemed more foreboding.

I’m curious to know how and where a you get all that film processed, because here in the states there are few choices and expensive. To ship, process and scan a 36 exposure roll, I’m out $50 plus.
Thanks!