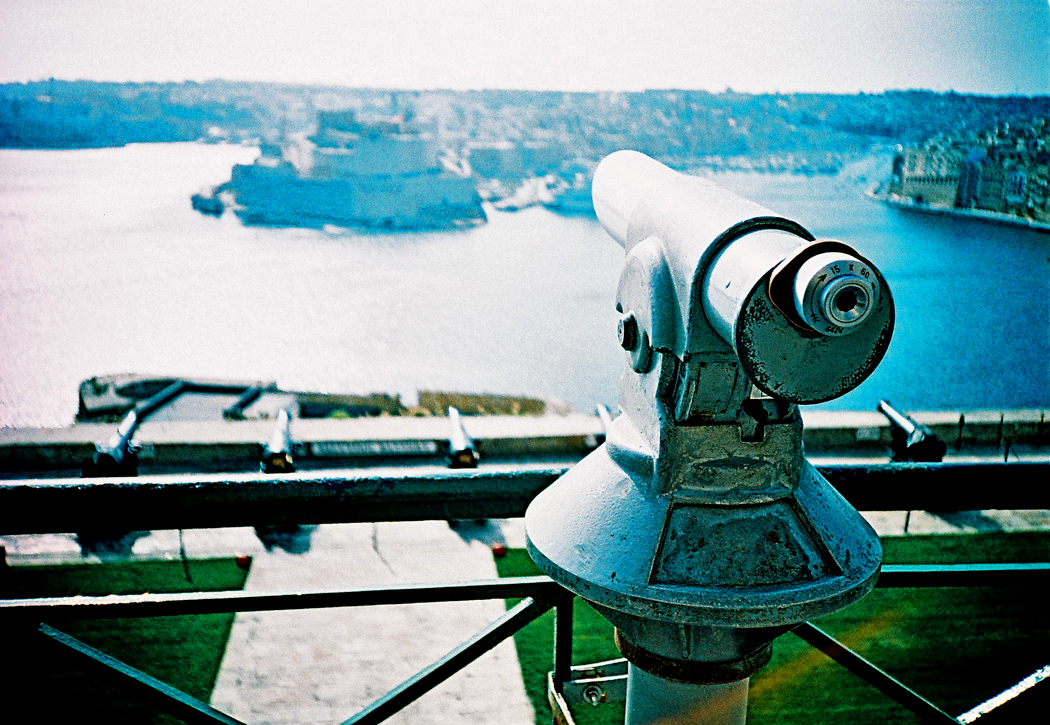 Ever since I was a kid, I’ve wanted to visit Malta. A sun-baked speck of rock in the middle of the blue Med, a crossroads for history stretching back into centuries past.

Since I moved to London from New Zealand more than 20 years ago, it’s been near the top of the travel to-do list, but life – or lack of funds – always seemed to get in the way.

That was until this April; finally, there was the chance to spend a few days exploring Malta, and burning through a bag full of film.

Malta is a little more than 122 square miles, perched in the Mediterranean Sea between Sicily and the North African Coast. It has a population of under half a million, and its picturesque capital, Valletta, is little more than a square mile in size; it’s one of the smallest capital cities in the world. But it is a capital that has been fought over by more of the world’s great powers than most, from the Phoenicians to Nazi Germany. Its Grand Harbour is one of the world’s great natural harbours – one that has been transformed over the centuries as empire after empire vied to control Malta and its strategic position.

Nowadays, Malta is a member of the European Union, and no longer threatened by fleets of ships or aircraft. The invaders these days are tourists.

A friend of mine – a fellow photographer – grew up In Malta, and had told me the island’s stark landscape, and wealth of historic sites would make for great photos. So I arrived in April with a bag full of cameras, hoping to capture some of this island’s character.

Usually, when I travel, I do a lot of shooting on Pentax ES IIs; they’re my favourite SLR to use, and I’ve got a few working bodies and a bunch of lenses. They’re dependable, and the old Takumar prime lenses are some seriously fantastic glass. This time, I wanted to shoot with everything except SLRs, instead I’d shoot on some of my compacts, rangefinders and medium format bodies that spend too much time at home and not enough shooting.

(All taken on a Fed 50 and Agfa Precisa cross-processed)

Fed 50: A chunky zone focus camera, the Fed 50 is a Soviet clone of the famous Olympus Trip 35. Like the Trip, the Fed 50 has a giant selenium meter in the front of its 38/2.8 Industar lens. It’s based on the old Fed Micron half-frame camera, which is beautiful 60s-era camera.

LOMO LC-A 120: LOMOgraphy UK very kindly allowed me to borrow one of their LOMO LC-A 120s for this trip. I tested one back in December soon after they came out. The original LOMO LC-A was one of the cameras responsible for my love of analogue photography. Its super-sized cousin is a fantastic camera.

LOMO Lubitel 166U: The last in a long line of Lubitel cameras produced in Soviet-era Leningrad, the Lubitel 166U  was released in 1980. I’ve blogged before about the charms of the Lubitel; a dinky, mostly plastic TLR, the Lubitel was a no-frills medium format camera for those whose pockets weren’t quite deep enough for a Rolleiflex or a Mamiya. The Lubitel might look like a toy camera but its lens is real glass; it’s capable of taking beautiful pics.

Olympus 35RC: Dubbed the ‘poor man’s Leica’, the Olympus 35RC is a tiny rangefinder from the 1970s; it packs an awful lot of features into its small metal body. The whisper-quiet shutter makes this a natural for street photography; popping the camera onto Auto allows you to choose the shutter speed you want and the camera will choose the right aperture.

Shot on an Olympus 35RC and Kodak Ektachrome

Porst 135 C Auto: A rebadged version of the Cosina CX-1 for the West German market; the CX-1 is a Japanese zone-focus camera that inspired the LOMO LC-A. It’s broadly similar, though the lens cover is a little more complex than the LOMO’s. It’s a take-anywhere camera with the same quirks as the LOMO – the lens vignettes dramatically and saturates colour.

Zorki 4K: The Soviets produced Leica clones in the many millions, and decades later the Zorki 4K is one of the most useable. It uses the old Leica screw mount, but unlike many of the previous models is easier to use thanks to its wind-on lever. The Jupiter-8 50/2 lens which came as standard is a cracker, too. You get the Leica look at a tiny fraction of the price.

Along with this bunch came a load of films; I’m never one to travel with exactly the same film stock, so there was old Agfa Vista and Optima 100 print films, Agfa Precisa for cross-processing, and Kodak Ektachrome.

Valletta wasn’t overhyped; the harbour, sparkling on a sunny spring day, is one of the most impressive sites I’ve ever seen. The view from the top of the fortress, with the cruise ships, yachts and oil rigs spread out like toys below was worth the journey alone. Many cities boast of history around every corner; in Malta, it really is true.

Even the recent past isn’t forgotten. Valletta’s streets, rising and falling down the hillsides as they radiate off the main thoroughfare, such as Triq lr Republikka, are full of old-fashioned signs for businesses long gone; cinemas and cafes, camera shops and boutiques, tailors and many more. The signs still remain, adding a layer of mid-20th Century curios to the capital multi-layered history.

I stayed in Senglea, across the Grand Harbour from the capital, in an Air BnB apartment owned by an Italian architect who now calls Malta home. Senglea is a dockside community, and its fortunes were tied to the harbour’s bustling quaysides. The warehouses are mostly quiet now, and across the harbour luxury yachts have replaced the cargo ships and steamers. But behind the quayside Senglea’s street are quiet and empty of tourists; it’s a working class neighbourhood with an atmosphere halfway between Tunis and Naples.

Valletta’s grid of streets is a photographer’s dream; Italian gelateria and English phone booths, Mediterranean cats stretching and yawning as youths in Premier League football shirts. The Catholic Church still rules the rituals of Maltese life; except here you’ll hear priests praise “Allah”, the Maltese language , as it is, to Arabic more than Italian.

Less than an hour away from Valletta by bus is the seaside village of Marsaxlokk. It is here where Malta’s fishing fleet sets out to catch the specials of the day for Valletta’s restaurants; Marsaxlokk’s waterfront is thronged with seafood restaurants full to bursting come Sunday lunchtime, after the morning fish market. Everything from swordfish to silvery seabass, moray eels to dogfish, scuttling crabs to slithering octopuses line the tables. (Read a post here).

Towards the northern end of the island is Mdina, the Silent City, a medieval fortress settlement of reverent calm behind imposing walls. When I visited, a medieval festival was in full swing; the burger bars and fridge magnets in stark contrast to the flowing robes and swords. The solitude away from the main square was almost unbelievable. Wandering around with my old Lubitel was a pleasure. Silence, and shafts of silent and skulking cats. (Read a post here)

In Mdina I stumbled across a Russian wedding, the bride and groom-to-be walking through the city streets towards the ceremony, photographers and friends in tow. My Porst 135 was loaded with old LOMOgraphy Tungsten slide film; the shots above have a weird dreamy quality. I’m guessing if the wedding photographer had produced pics like these, there might have been a tantrum or two.

For more pics, check out the Malta set on Flickr.

We’ve just booked our honeymoon for Malta and I’m so excited to take my cameras there too. I’m living vicariously through your photos until May now 🙂

Great post! I was in Malta a couple of years ago but it was before I got into film photography.
An artist had turned up in Valletta and painted Caravaggio works on post boxes around the city. I only discovered three, we were staying at the other end of the island.
https://bloggerphotography.wordpress.com/2014/11/27/caravaggio-postbox/