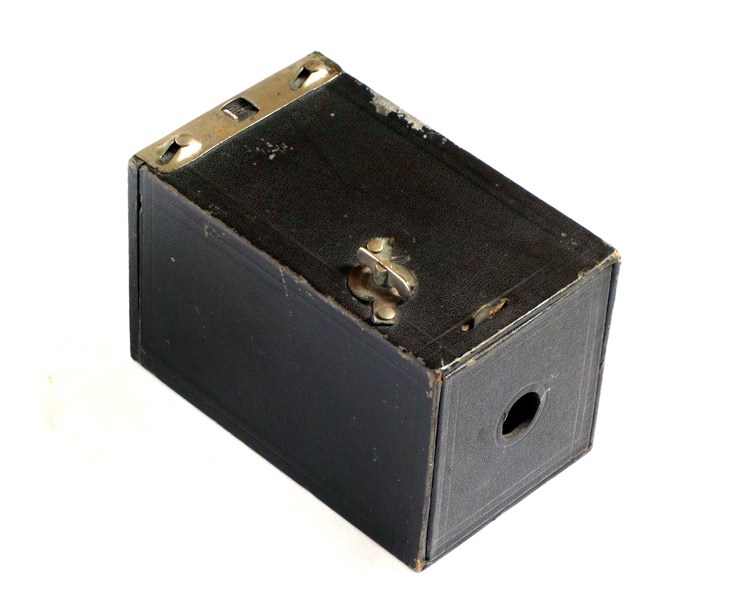 Home Analogue lifestyle The Kodak Brownie: The most important camera ever made?
KF article top

It doesn’t look very exciting – a cardboard box about five inches (13cm) tall, covered in leatherette, with a small round opening at the front. You might have some trouble working out what it was for if you didn’t know. But the Kodak Brownie might be the most important camera ever made.

Before it appeared in 1900, cameras were distinctly unwieldy, if not downright cumbersome. Early cameras tended to be made of a great deal of brass and mahogany and took pictures on to large glass or metal plates, often requiring exposure times measured in minutes.

To photograph far-flung places, porters and pack animals were often needed to carry the equipment. Photography was an activity involving patience, toxic chemicals, and brute strength. It was not something the ordinary people indulged in.

US inventor George Eastman took an important step forward in the 1880s, when he popularised a flexible film that did away with the need for weighty plates. His first “Kodak Camera” went on sale in 1888, pre-loaded with enough film to take 100 photographs. When the last picture was taken, the entire camera was sent back to Kodak to be developed.

It was an uncomplicated box but it cost $25 – a significant amount of money. It was still a device for the wealthy.

The revolution came 12 years later. The Kodak Brownie, designed by Frank Brownell, looked similar to the original Kodak, but the film could be taken out of the camera after shooting and developed via Kodak stockists, chemists or even at home.

And Kodak sold the camera for the princely sum of $1 – you could buy the camera, a film and have that film processed for just $2. Photography had suddenly become not only portable but affordable, too, and the Brownie was easy to use. It had a single shutter speed and narrow apertures that created deep depth of field. The lens could not be focused and early Brownies had only a basic viewfinder – many people just used marks on the top of the camera as a rough guide to what might be in the frame. You shot, and you hoped.

The Brownie democratised photography simply through the sheer volume of sales,” says Dr Michael Pritchard, director general of the Royal Photographic Society and the author of The History of Photography in 50 Cameras, published in November.

“A $1 or 25-shilling camera capable of producing reasonable results was innovative, and coupled with Kodak’s ability to provide directly or through an enormous number of chemists and photographic retailers a developing and printing service meant that photography became accessible irrespective of your social class or photographic skills.”

The Brownie was also supported with a range of accessories from albums to home processing kits, which helped convey the idea that photography was something for anyone. “Competitions and clubs for Brownie and Kodak users also reinforced this sense with the general public,” Pritchard says.

Brownies were aimed at children, among others. “Plant the Brownie acorn and the Kodak oak will grow,” one slogan went. The camera’s boxes were adorned with a cartoonish character, created by Canadian illustrator Palmer Cox.

The stroke of genius behind the Brownie was that Kodak was essentially a film-making company, and the cheap new camera created a huge demand for these films by giving the people the means to take pictures, again and again.

Brownies were simple and sturdy. They were designed to accompany people on their daily lives – a novelty at the time. In a production run some eight decades long, the Brownie can be argued to have captured more of the 20th Century than any other kind of camera.

There was a tendency with the first Brownies for the back door to flip open at the wrong moment, which led to the first of many modifications.

The No.2 Brownie, released 18 months later, used a slightly different film format – 120 film, or medium-format film – which is still made today. Many millions of No. 2 Brownies rolled off the production lines – the last in 1935 – and many are still capable of taking pictures today.

One photography enthusiast who still uses them is Gary Cole. “I was looking at images I had shot with my ‘do-everything’ DSLR and it got me thinking back to the early days of photography,” he says. “I was looking for something simple.”

It takes time to get used to the Brownie’s limitations, Cole says.

“The shutter of the Brownie is somewhere between 1/25th to 1/30th of a second so you have to be sure to hold the camera steady. I do tend to take more time to compose my shots no matter what type of film camera I’m using. The Brownie is not a camera you’re going to be blazing away at 10 frames a second with.”

Gordon Lyster, another photographer who uses them, agrees that the lack of automation leads to more considered photography.

“Including processing, it’s basically £1 each time you click the shutter,” he says. “Because you don’t just click, click, click away, you actually seem to end up with a much higher ratio of useable photos than when shooting digital.”

There is a paradox here. A century ago, the Brownie singlehandedly gave rise to the idea of the snapshot – a picture created on the hoof, without the need of a tripod.

Photography became an everyday activity. Normal life could be pictured, instead of the carefully posed dioramas that required subjects to stay unnaturally still.

Along the way, Brownies were there when history happened. In 1912, 17-year-old Bernice Palmer was travelling from New York City to the Mediterranean on the SS Carpathia – the ship which was diverted to pick up survivors from the sinking of the Titanic. Palmer had with her a Brownie camera – her pictures of the survivors being hauled aboard the Carpathia and the iceberg which had sealed her fate are among the only recorded images of the disaster. Her Brownie, and the pictures it took, are now part of the Smithsonian collection at the National Museum of American History.

Brownies also went to war. The cameras were small and light enough to fit in a soldier’s pack, and pictures taken on Brownies – alongside other portable cameras that came in its wake – allowed soldiers to document their daily life in the trenches.

Earlier this year, the pictures taken by one British soldier, Hubert Berry Ottaway, were found by his grandson in a loft and developed, providing a fascinating glimpse of the life of an ordinary serviceman on the Western Front a century ago.

One of the UK’s most celebrated photographers Bert Hardy took a series of famous shots on a Brownie in the 1940s and 50s, Pritchard points out, proving that a great photographer does not need the latest equipment to take great photographs.

“The Brownie” went on to be a badge sported on nearly 100 different camera models. Some were folding cameras, some were art deco designs, some were even movie cameras. Brownies lost the boxy shape and the leatherette, favouring sleeker designs, Bakelite and plastic. The last of them rolled off Kodak’s production lines in the 1980s.

“The Brownie range became the best-selling camera range of all-time ‒ and the name is part of popular culture even though it has not been used on a camera from some 35 years,” says Pritchard. His book points out that the word “Brownie” is still used among photographers to describe a reliable, but basic camera.

“The design of the camera was always such that there was sufficient latitude in the lens angle of view, the fixed focus, and the film sensitivity that within fairly wide parameters it would just always get the shot,” says Pritchard.

“Well, mostly – there were always some users who would put a finger over the lens, point the camera the wrong way or forget to wind on the film… even good design and simplicity can’t quite account for every user!”

The man who brings Brownie back to life

Randy Smith is a camera repairer based in New York who specialises in restoring toy cameras – the plastic-lenses, cheap and cheerful cameras that have become something of a craze with hipsters. He also modifies and restores Kodak Brownie Hawkeyes, a Brownie model from the late 1940s.

“A Photographic tool doesn’t need 16MB sensors or expensive lenses. With the Hawkeye, it’s truly point and shoot,” he says. “With the old un-coated lens on the Hawkeye, you’ll swear you took a step back in time when you see your images. They just create that old 50s look. People my age see the photos and it conjures up fond memories of childhood.”

The fact that Brownies are still used today is testament to the simple, sound design, he believes. “A lot of digital users went digital because their job demanded it. But they never lost their love of film, the smell of the chemicals, working in a dark room, waiting until they returned home to process the film to see if they had a successful photo shoot. Or for the snapshooter, waiting a week to get their film back from the lab. Digital will never compare with the warmth of film.”

What an outstanding article!

I have a Brownie No. 2. It creates magical images, pin sharp in the centers and soft in the corners. It was born to shoot Ektar 100 color film, which wouldn’t exist for something like 80 or 90 years at the time the camera was first manufactured.

[…] NuBox 1 is inspired by the classic Kodak Brownie of the early 20th Century, the camera that did more than any other to turn photography into a […]