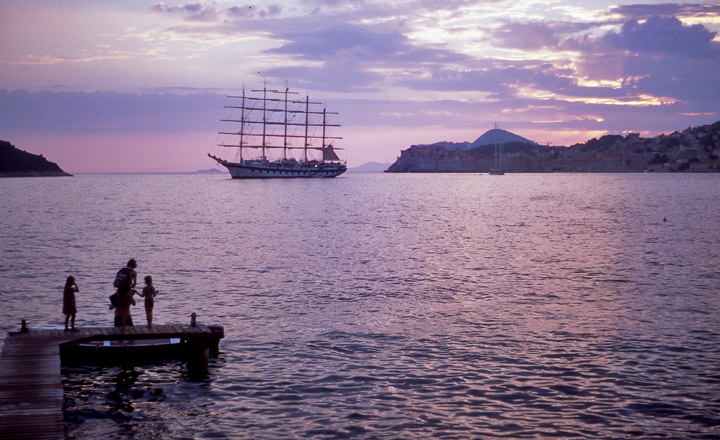 Dubrovnik is a city impossible to forget; a concentration of spires and towers surrounded by crumbling fortified walls, nestled between Croatia’s rugged mountains and the Adriatic Sea. Formerly known as Ragusa, Dubrovnik was a Renaissance power player, a city state which vied with nearby Venice for control of the seas, and which fell into graceful decline amid the clash of Ottomans and Christians. Few cities have grown so old so gracefully.

Dubrovnik was a favoured haunt of film stars and the European jet set even when Croatia was part of Socialist Yugoslavia, after World War II, its marina full of Italian yachts and the restaurants crammed with foreign holidaymakers. Then came the Balkan Wars of the 1990s, and a siege which lasted seven months. Serb and Montenegrin units ringed the mountainsides, shelling and sniping the walled city.

Two decades on, and the city’s tourist allure has been well and truly regained. Come high season and there are cruise ships at anchor in the harbour every day, endless streams of tourists thronging the smooth marble promenade of the old city’s main thoroughfare Stradun. The city’s restaurateurs and bar and boutique owners make such a killing during the high season that many shut up shop for the quieter months.

The city’s compact size, warren of streets and contrasting backdrops make it a perfect photographic location, especially in the height of summer, the shaded streets giving some respite from the hot sun. My trip to Dubrovnik was one of the first overseas trips since I became more committed to using the old cameras I’d bought on a whim from eBay or flea markets and which had been sitting on the shelf, and on as many of the rapidly dwindling film stocks still available. Shooting a project, uniformity is key (one film stock, and as few focal lengths as possible) but with something like this you’re limited only by the number of cameras you want to lug about in your hand luggage.

I had nine days in Dubrovnik, a perfect amount of time. The old city can be fully explored in a few hours – hence why there’s so much cruise ship activity – but is full of quiet lanes and shady passages only a few metres from the tour groups. The city’s proximity to Montenegro’s Bay of Kotor is worth taking advantage of to; Europe’s southern-most fjord is another destination well worth seeing. In the harbour sits the island of Lokrum, home to nudist beaches and a monastery with landscaped gardens, while the protected island of Mljet, complete with saltwater swimming lakes, is 90 minutes away by catamaran ferry. Even Bosnia’s Mostar, home to the famous Old Bridge, is easily reached by car or bus.

But Dubrovnik itself has plenty to photograph. The narrow streets winding off the main thoroughfares are perfect places to people watch and capture local colour. The walls, which run for two kilometres around the Old Town, offer a vantage point to shoot the throngs of visitors on Stradun’s polished thoroughfare. The terracotta roofs glow as the sun dips down – the textured walls coming alive in the red-toned light. The harbour is a hive of activity, water taxis and pleasure boats dwarfed by gigantic cruise ships, gleaming yachts bobbing next to rustic fishing boats. The rocks at the end of the harbour, warmed by the sun, are also a favoured haunt for some of the local cats.

This being the Mediterranean, the afternoon sun is bright and hard – dipping into the open shade of the covered streets both softens the contrast and keeps you out of the worst of the heat. The local cats – semi-stray and housecats alike – patrol their territories. I caught the shot of the street bruiser below preparing an ambush on an interloper. He didn’t even spare me a glance.

The sheer amount of tourists mean this is not a place for authentic slices of Croatian life, but where there are hordes of tourists there are also ample opportunities for street photography, or reducing the shuffling, shutterbugging hordes to a blur behind the details of the city. The abstract blur of the people behind the restaurant display below is one of my favourites.

The best panorama to capture the city is the looming Mt Srd, right behind the city. A cable car takes just four minutes to reach the 778-metre-high summit, reducing the city to a toy town cluster of red roofs and white stone.

Check out more pics from Dubrovnik on my Flickr. There are also plenty of other great shots here on Flickr’s Dubrovnik Group. Also, if you do make it to this fantastic city, make sure you pay a visit to War Photo Ltd, a gallery focused on war photography set up by Kiwi photographer Wade Goddard.

Lovely essay and fine images – particularly the ‘through the hole’ view. I absolutely have to go there after too many near misses.

I’ve just discovered your blog via JCH Blog and I must congratulate you on your great work!

After seeing your photos, we are looking forward to our upcoming visit in Sept. 2014. We are just starting the process. 6 of us will be traveling from Vienna and/or Venice prior to our arrival in Croatia. Many issues: Planes, trains, cars & boats – which ones, where too, how many days is enough. Thinking about 2-3 weeks overall.

Great photos, I loved the one of the kitty cat.