Back in 1984 I thought it was time I upgraded from the Yashica TL Electro X I had been using for a number of years. The Canon AE-1 had made a big impression in the market at this time, with great optics and a level of automation that seemed attractive to an amateur photographer like me, so off I went to the camera shop in Melbourne expecting to buy a Canon.

The salesman had other ideas though, and drew my attention to a brand I had not heard of before, Contax, and their advanced for the time 139 Quartz. A prosumer camera aimed at advanced enthusiasts and the semi-professional market, its Carl Zeiss lens, TTL flash metering and aperture-priority exposure control won me over. The Yashica was duly traded in for a shiny new Contax 139 Quartz, which I used for the next 20 years until I bought my first digital camera.

Early last year I picked it up again, not working and with a frozen lens. The body turned out to be dead with a failed shutter, but the lens was serviced and is as good as new. Ebay to the rescue, and I now have three serviceable bodies, and a small but growing collection of lenses.

The Contax 139 is a beautiful thing to look at, the result of a collaboration between Carl Zeiss, Yashica and Porsche who styled the body. Of all metal construction, finished in black, it was unfortunately let down by a rather fragile synthetic leatherette covering, which disintegrated quite quickly in service. This however is easily fixed with a number of companies offering laser cut replacement leather covers in a variety of colours.

The Quartz controlled electronic shutter travels vertically with infinitely variable speeds from 11 seconds to 1/1000  in AE mode, plus bulb. The flash syncs at a respectable 1/100 sec, and the Contax was one of the first cameras to offer TTL flash metering with a dedicated flash unit like the Contax TLA20 or TLA30.

Camera controls are thoughtfully laid out with the shutter speed selector on the left of the top plate with the film rewind. On the right front of the body is the metering button and exposure lock controls, along with the self-timer switch. The ASA (ISO) selector is combined with the feather-light shutter release on the top right (where many cameras have their shutter speeds). Next to that, the exposure compensation switch doubles as a multiple exposure control, a potential source of confusion to the uninitiated. Metering and exposure compensation are on the front right, above the self-timer switch. There is a PC flash socket and remote shutter release socket. 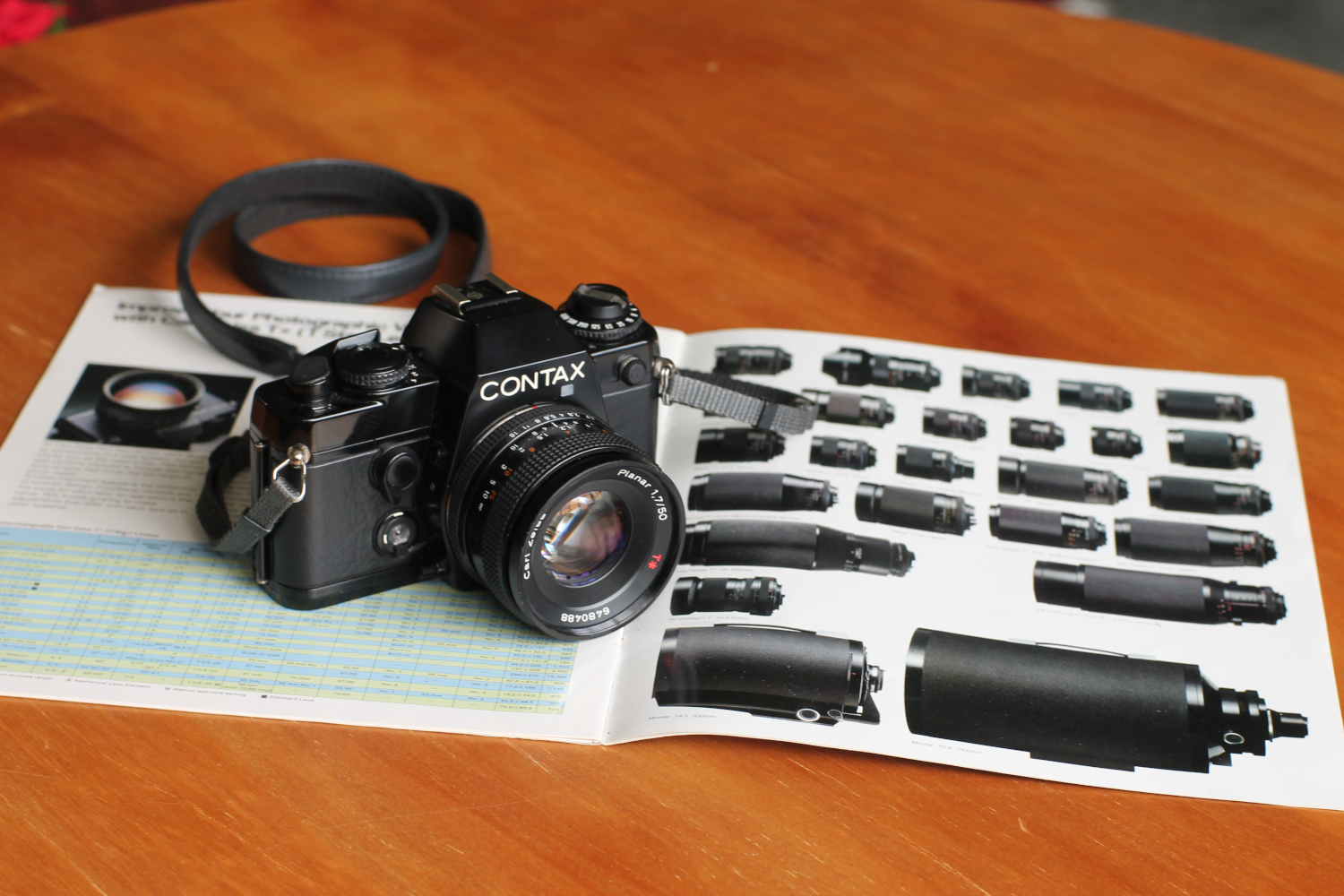 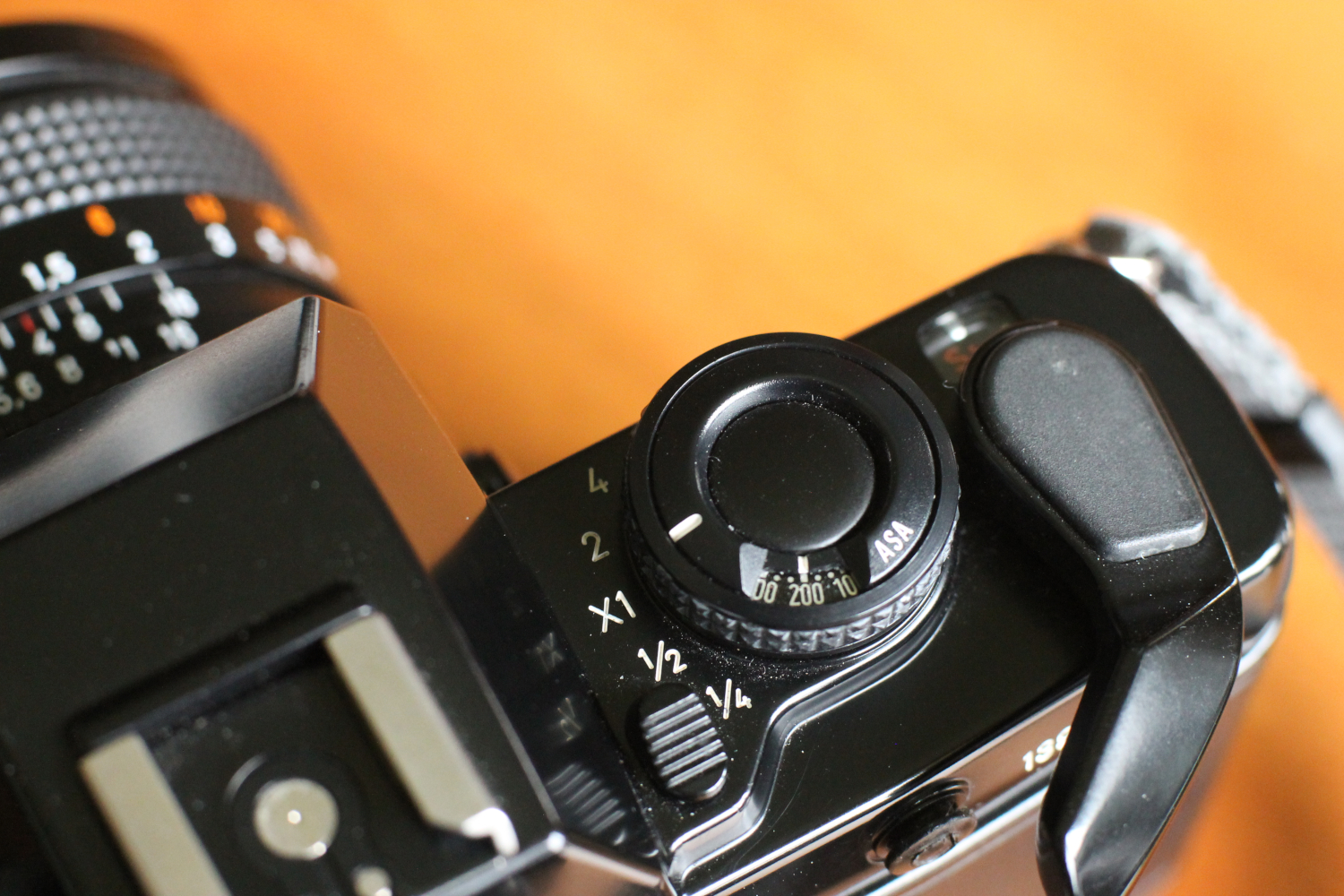 The Contax is a delight to use – small for a 35mm SLR, it is similar in size to the well-known Olympus OM series, but still feels solid and well built.  Lenses are all manual focus, and the prism viewfinder is bright and clear, with a split-screen focus point in the centre, surrounded by a microprism circle and then matte screen. Viewfinder coverage is approximately 95% of the image area, and the DOF preview helps when shooting wide open. The selected aperture is shown in a little window at the top of the finder, and along the right hand side LED lights show both the selected and recommended shutter speeds when shooting manually. 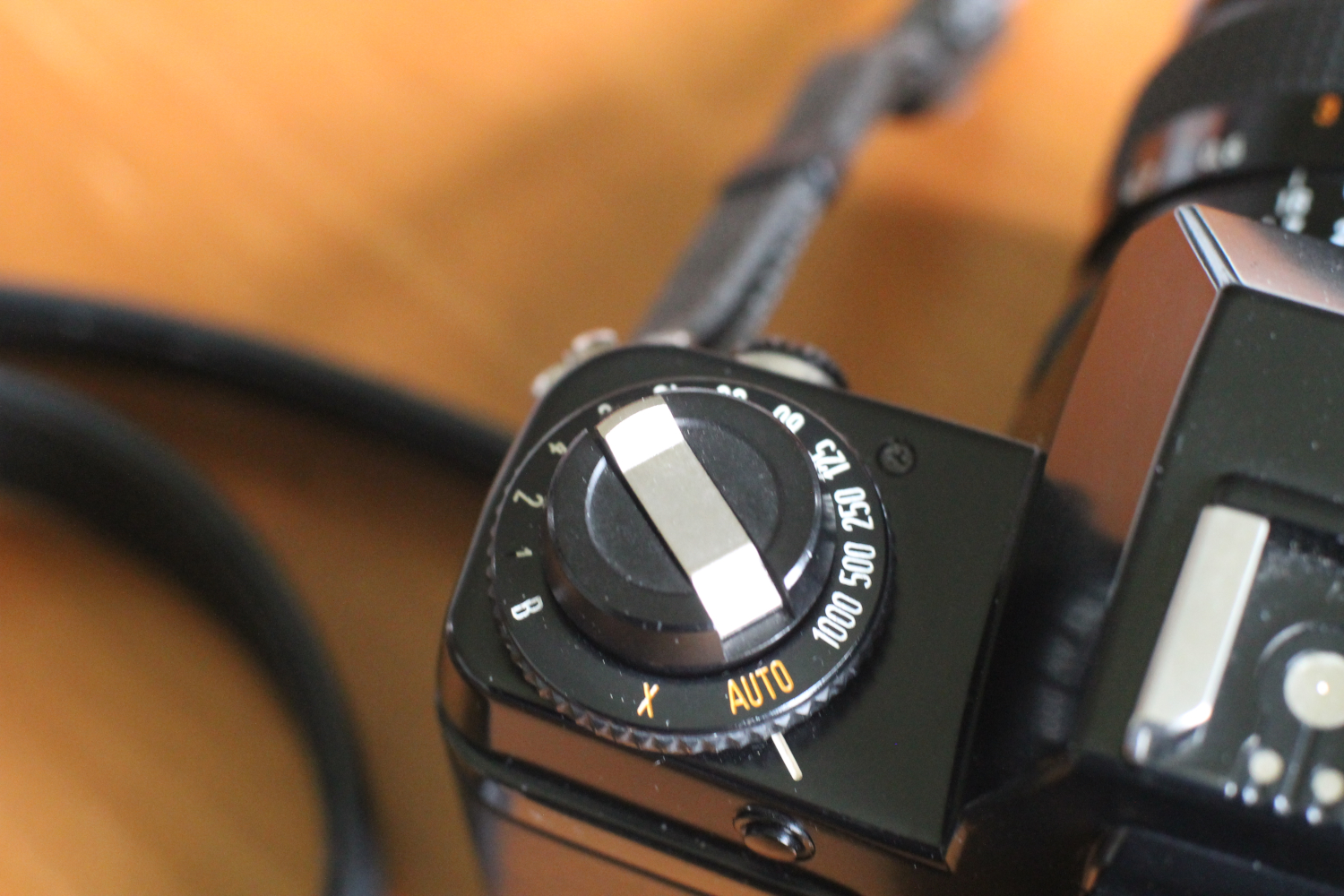 Not everyone likes this system, but to me if seems very intuitive and simple to use. Aperture is controlled with the first ring on the lens, focus and zoom if applicable with the second ring. The Zeiss zoom lenses feature a one touch zoom and focus control which I like a lot. The focus does not seem to change with the focal length, and it is easy and fast to focus and frame all at once.

My Contax came with the famous Zeiss Planar 50/1.7, which was the kit lens and leaves absolutely nothing to be desired. The 50/1.4 is optically very similar, but more expensive. Either is a first class lens, with the wonderful Zeiss colour rendition and a beautiful buttery bokeh when shot open. 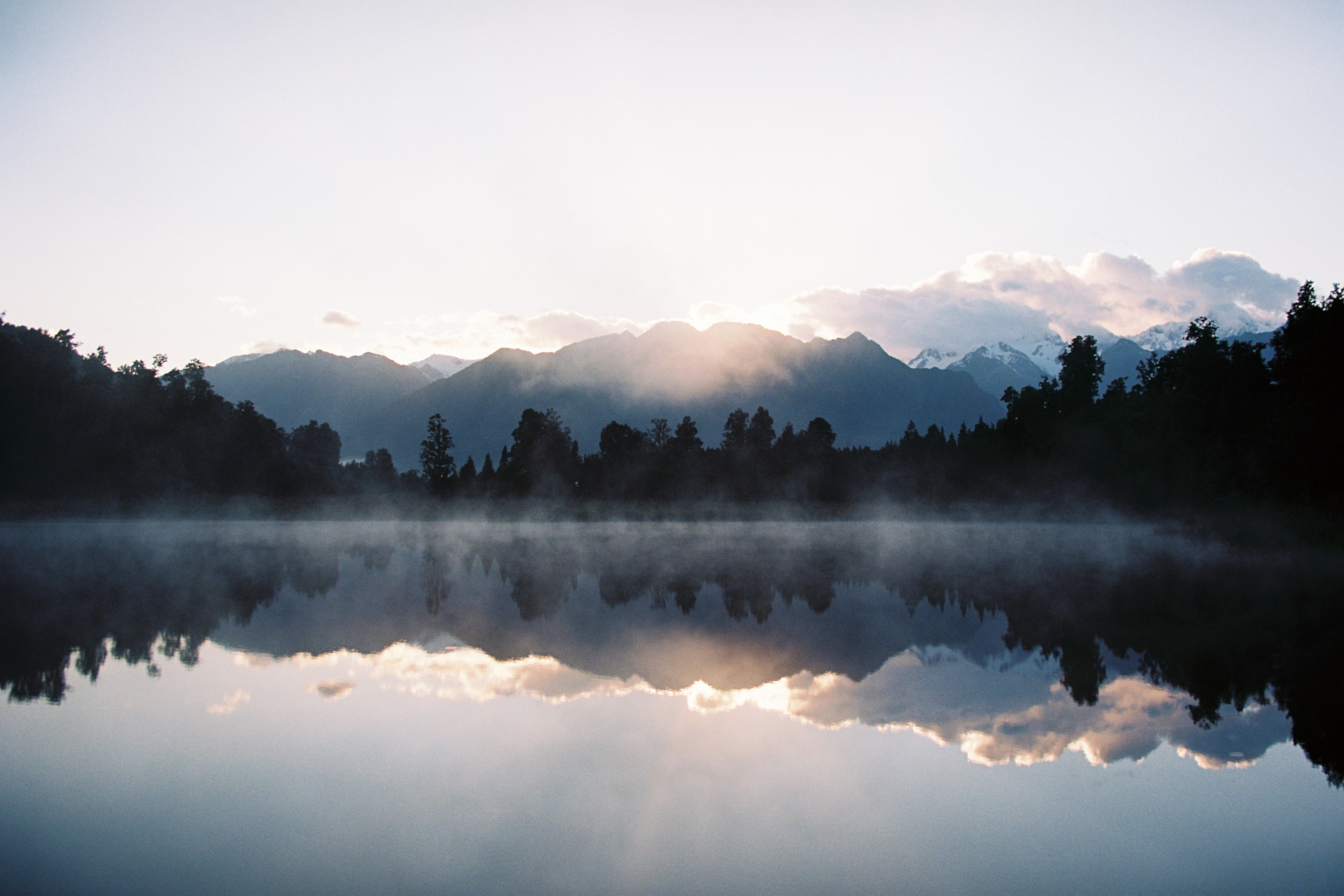 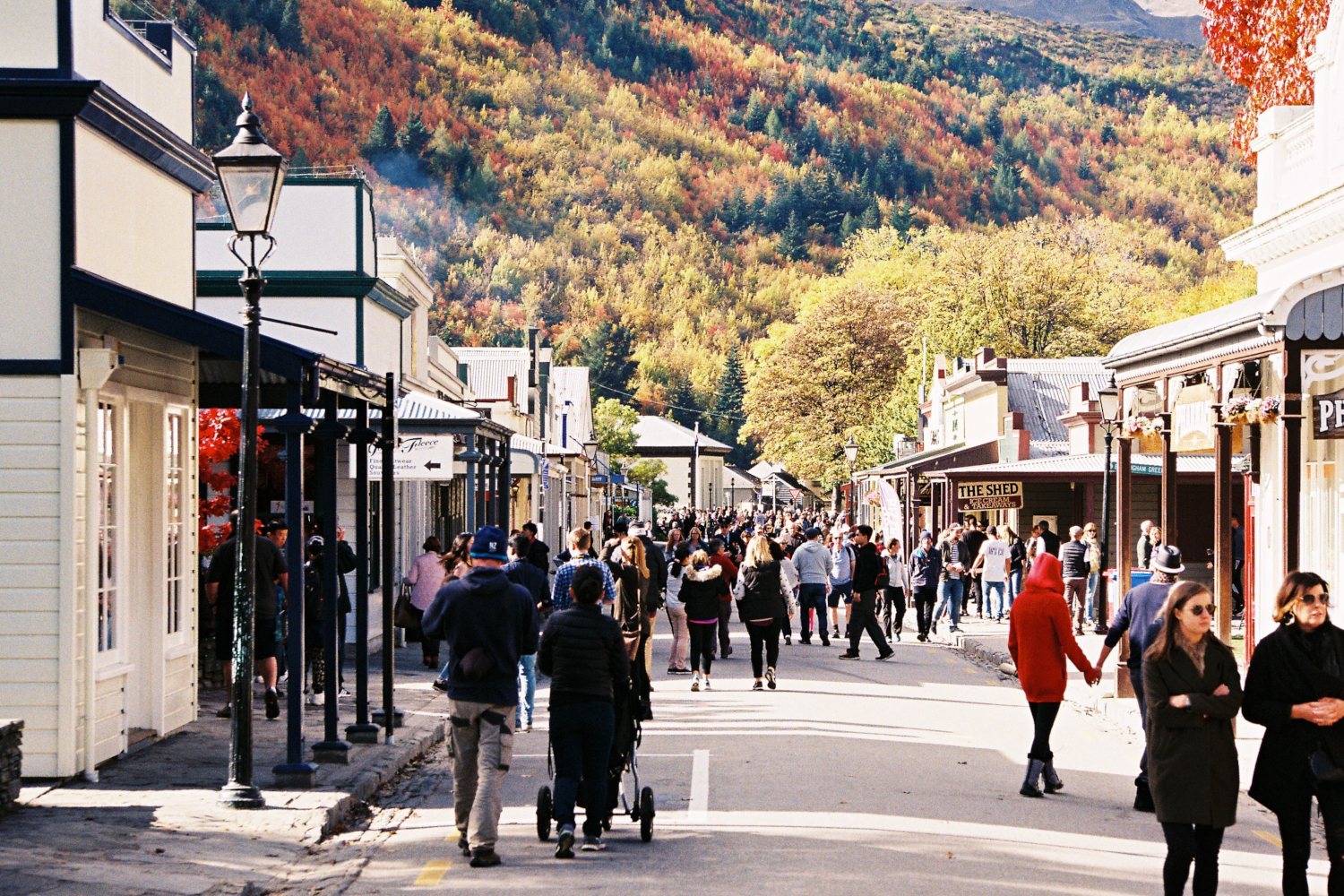 I also have the Zeiss Vario Sonnar 28-85/3.3 and the Vario Sonnar 80-200/4, along with a Tamron Adaptall 28/2.2 and the remarkable Yashica ML 42-75/3.5-4.5 short zoom, all of which are fine lenses. Contax extension tubes turn the Planar into a macro lens, and a Zeiss Mutar 2x converter completes my current collection of optics, which cover all the focal lengths I commonly use. One or two more prime lenses would complete the system very nicely.

There is a comprehensive range of world-class Carl Zeiss lenses in the Contax Yashica (C/Y) mount, as well as the excellent Yashica lenses (go for the ML Multicoated ones) along with a good range of third-party lenses. These lenses can be easily adapted to most modern digital DSLRs and mirrorless cameras, so are quite popular in the market, but still available at price points to suit most budgets. 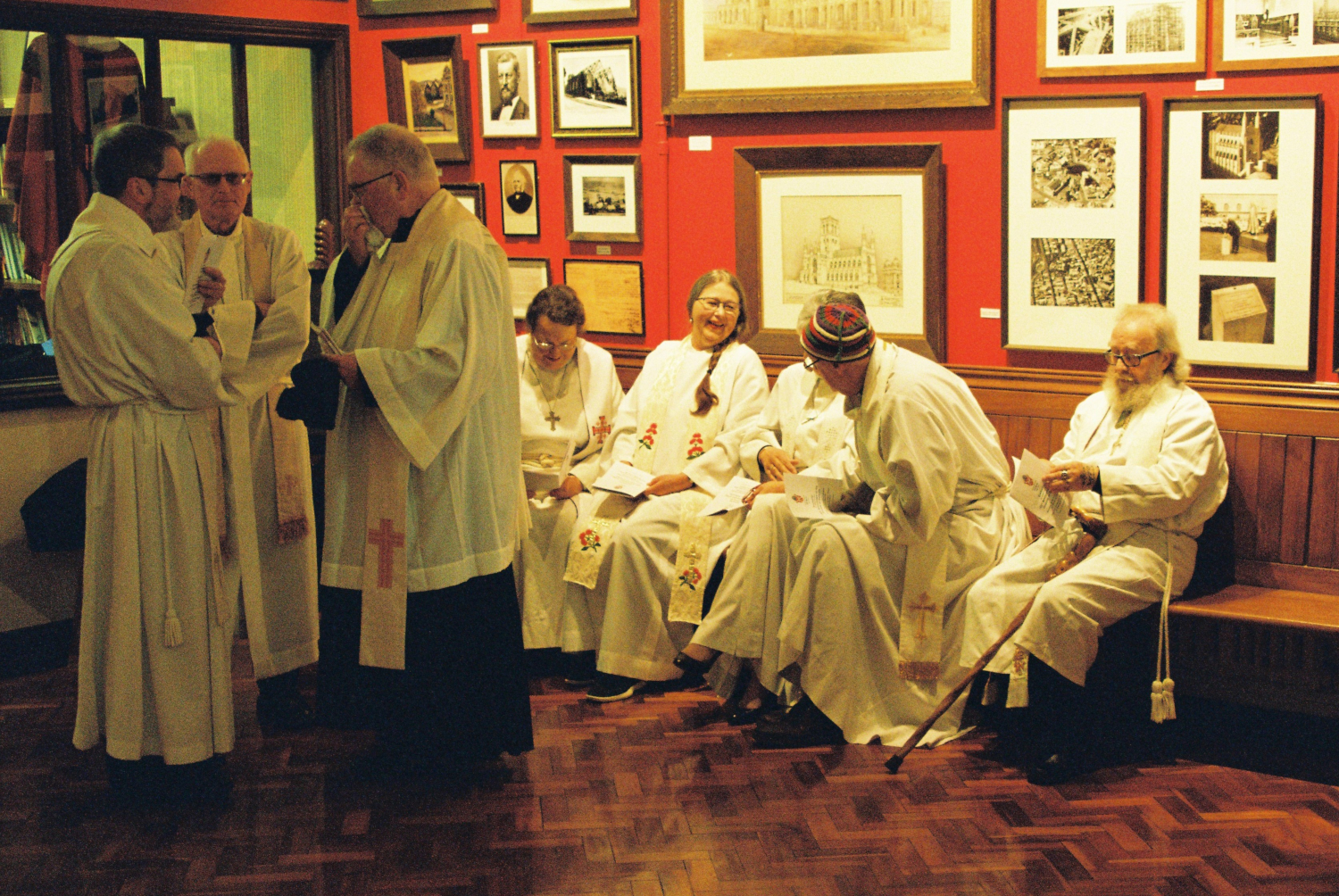 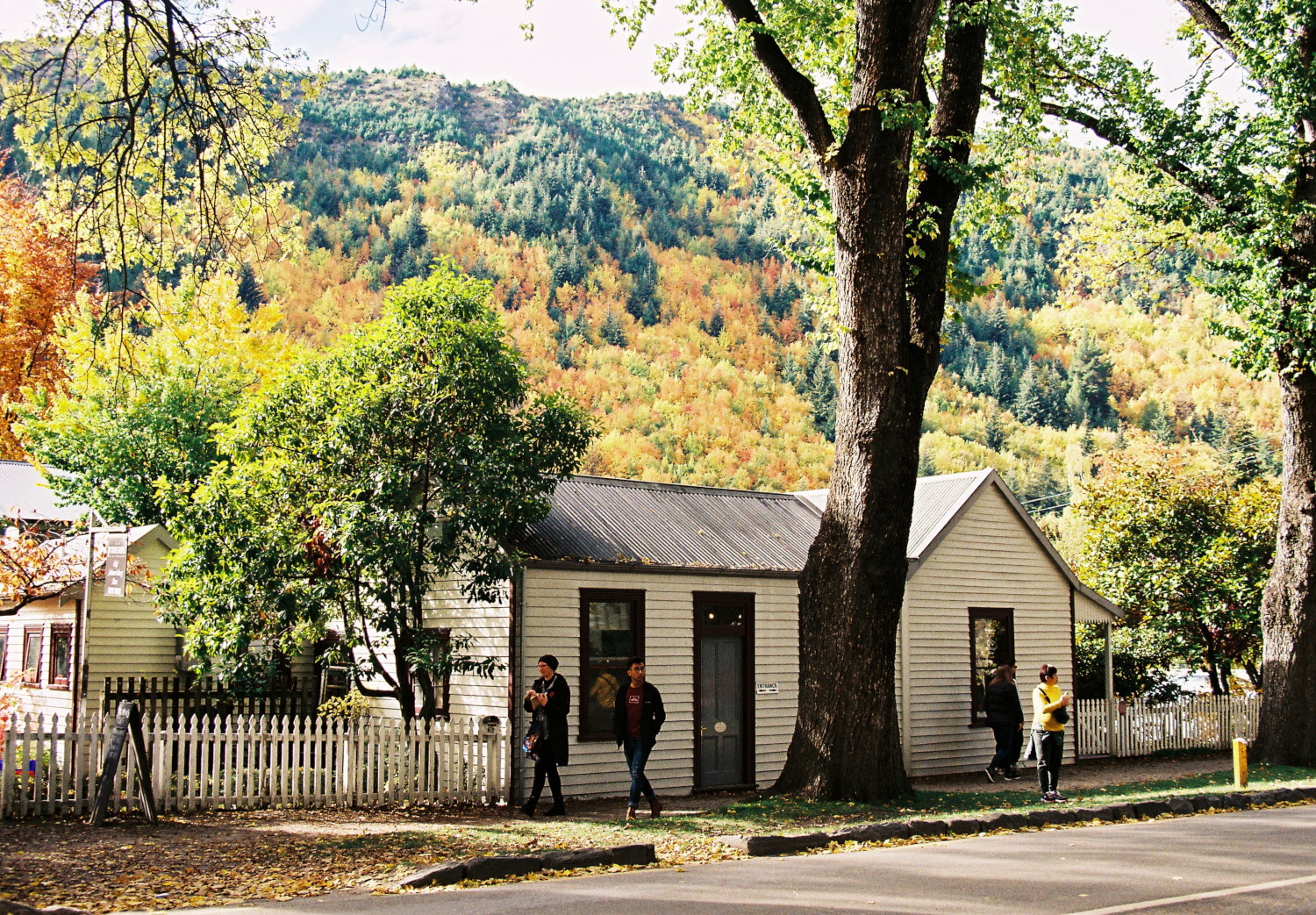 A wide range of accessories can still be found online, including a waist-level finder which slides onto the viewfinder, tele-converters, extension tubes, and a very good motor winder which allows you to shoot at up to two frames per second.

The thing I love most about this camera is that, apart from a 15-year digital gap, I have been using it a very long time. Familiarity means it doesn’t get in the way of the photography, the centre-weighted metering is superb, and the lenses are world class. 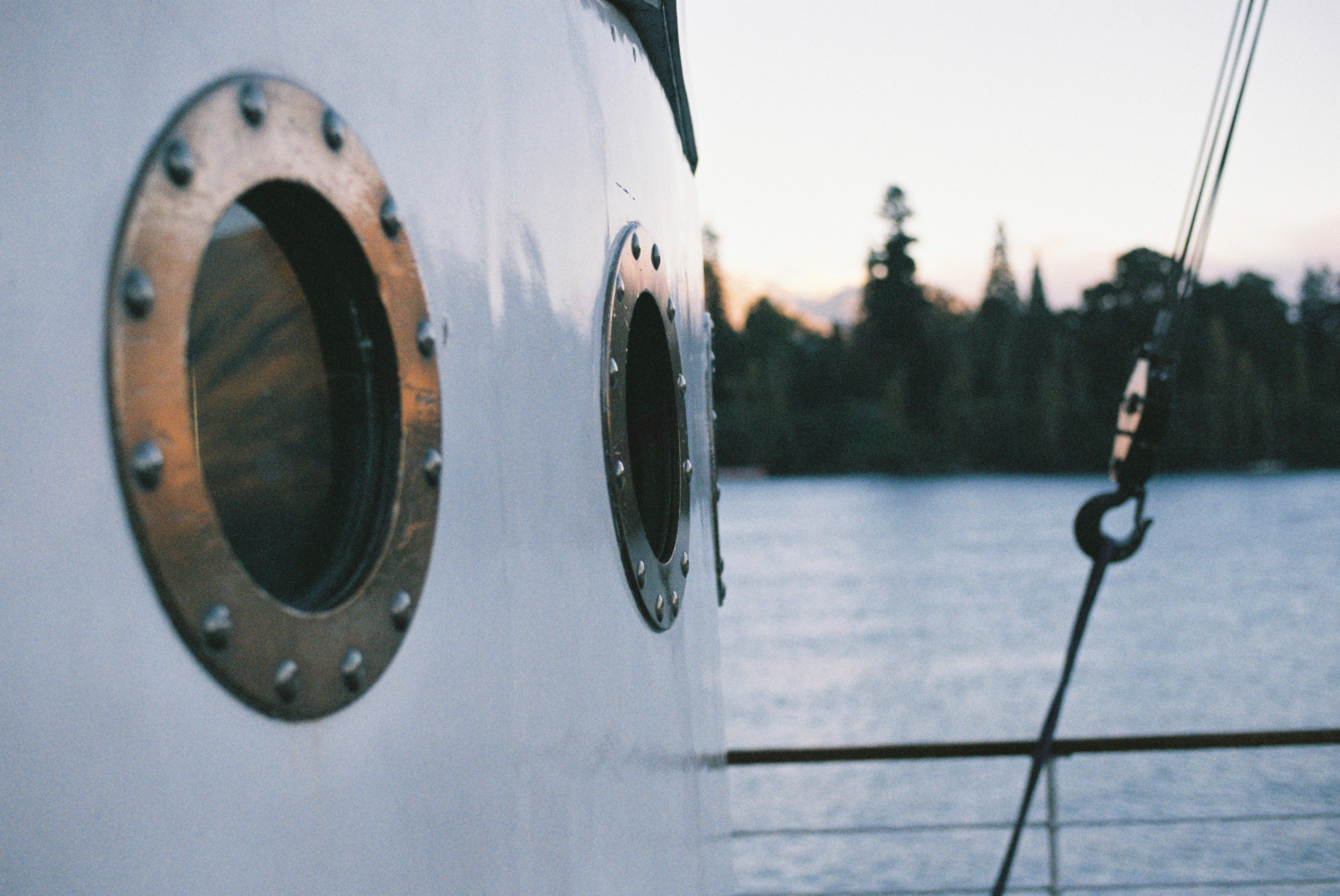 The colour rendition, look and texture that only film produces is addictive, so much so that I have also branched out into the world of medium format, which I am still getting to know! However the Contax is my go everywhere camera, it is relatively small, light and unobtrusive, and produces reliably superb images.

My camera bag typically contains a selection of lenses and two bodies, one usually loaded with Fujicolor C200, a great general purpose colour film, and the other loaded with either Kodak Ektar 100 or Kodak Portra 800, depending on what I am planning to shoot. I have found Portra 800 pushed one stop is a wonderfully flexible emulsion for indoor or low light photography, including portraiture, and Ektar 100 is brilliant for landscape work. 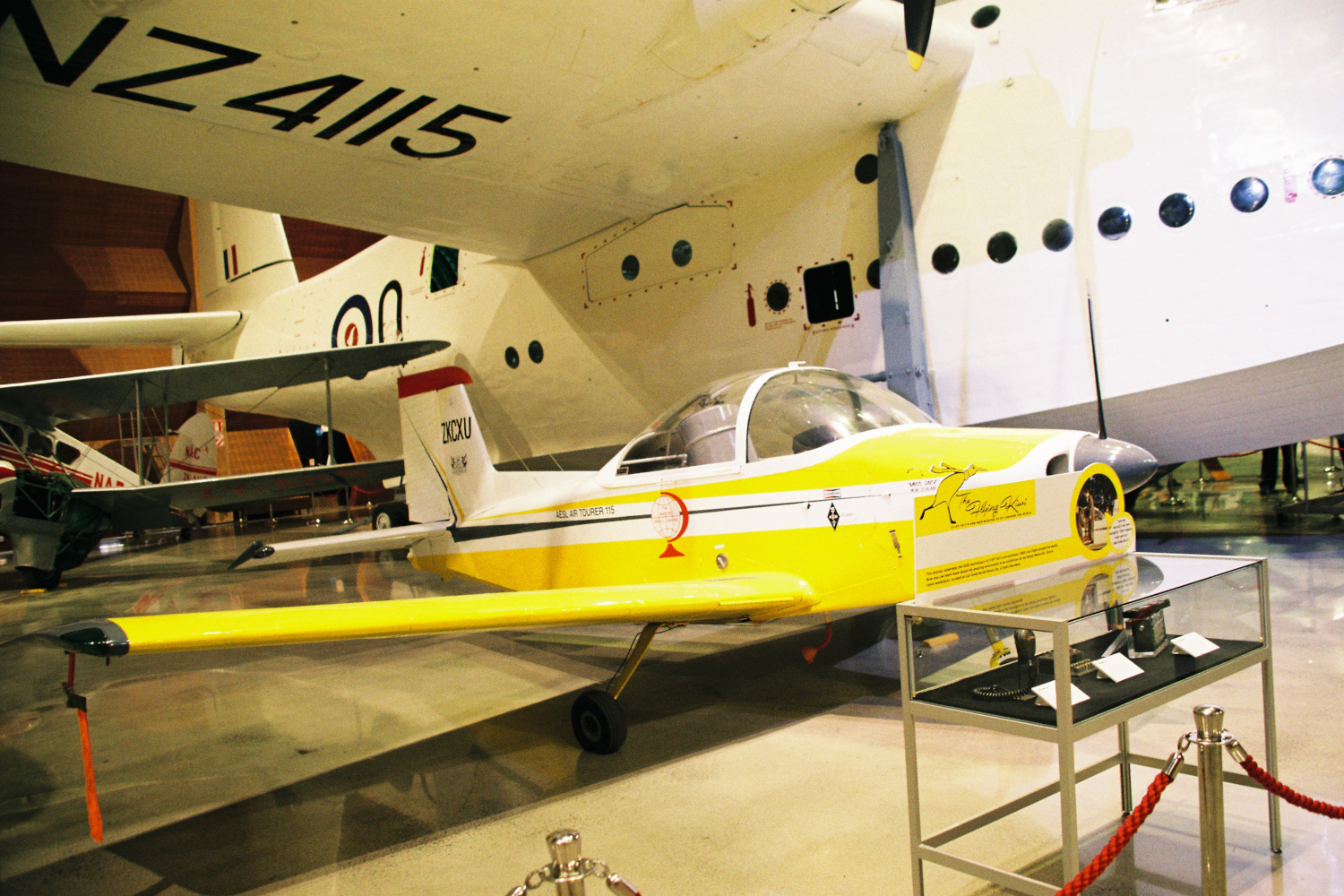 Contax only produced about 200,000 139Qs, compared to over a million of Canon’s AE-1s, so these cameras are not as commonplace, but I think they still represent a very reasonably priced and competent entry to the wonderful world of Zeiss.

Shooting a wedding reception on a Soviet Lubitel

It’s an insult to the even think to compare the Contax 139Q with the Canon AE-1!😁 That said, I fully agree with what you wrote, it’s a magnificent little camera, with a great viewfinder and fabulously smooth and quite film advance. If I may correct you, the shutter operates from 11s to 1/1000th in AE., not 1s. Thank you for sharing.

Many thanks, Paulo – I’ll make that change. Yep, having bought (and loved) the Aria, I fear this may make it on to my must-shoot list.

Paulo I agree with you. The Contax is a much better camera!

I love your pictures, the colors are really something. I too have had my Contax for many years and enjoy shooting with it. With the pancake lens it is very convenient to carry and people don’t pay much attention to it. I would like a back up, but it seems like working examples are hard to come by in my country. I settled for a couple Yashica FX-3’s but can’t say I enjoy using them. I also still have a couple Canon AE-1’s and I think they take great pictures but the lenses are a lot heavier and the whole… Read more »

Thank you Jon, they are a little hard to come by here in New Zealand too! So far through Ebay I have bought one each from the UK, USA, Italy and Japan. I gave one to my daughter for her first film camera, and I also got a 167MT from the UK, which I only use occasionally. Lenses have come from the USA, UK and Japan. Our country has recently got Ebay collecting sales tax though, so importing has become a little less attractive now! But I have still spent less than the cost of one professional quality DSLR without… Read more »