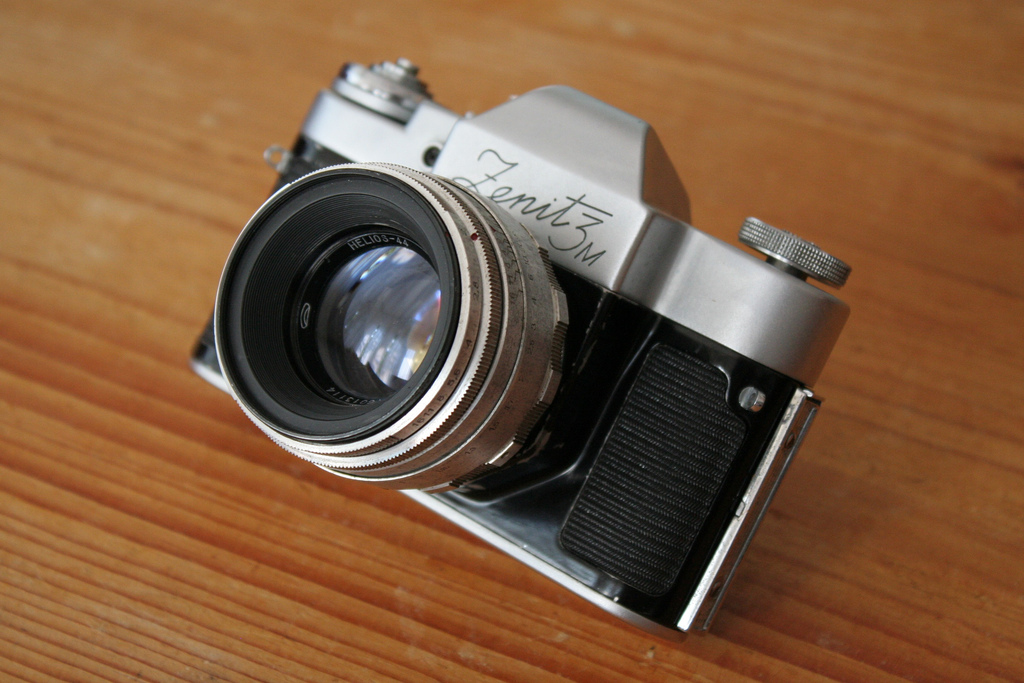 When the Zenit 3M hit camera shop shelves, the Soviet Union was at the peak of its powers. Its spacecraft regularly beat American rivals to set cosmic records, its charismatic leader Nikita Khrushchev demanded respect on the loftiest of world stages, and its military was a formidable match for the world’s greatest superpower.

In the years of Red Plenty, the USSR’s camera industry produced an enormous amount of cameras – many of them, it has to be said, less-refined versions of the kind of cameras which had made pre-WWII Germany such a powerhouse of design and quality. The Zenit 3 was an attempt to make something a little different. The engineers at KMZ essentially turned a Leica-clone Zorki rangefinder into an SLR, adding a ground glass pentaprism and a new lens mount, the M39.

The Zenit 3 was only made for a couple of years before the design was modified to create the Zenit 3M, which did away with the removable Leica-style back cover in favour of a hinged door like most Western SLRs. Nearly 800,000 were built in the USSR between 1962 and 1970, before the solid and simple 3M gave way to the Zenit-E.

The Zenit 3M was exported in huge numbers to the West – with rebadged versions appearing under names such as Revueflex (West Germany) and Global (Australia). They were pretty common in the UK too, hence why they crop up so frequently in camera fairs and second-hand shops. And there was at least one famous fan – revolutionary Che Guevara, a keen photographer, favoured the Zenit 3M alongside his Nikon rangefinder.

SLRs don’t come much simpler than the Zenit 3M. There are few frills – only a handful of shutter speeds, a ground-glass pentaprism and preset lenses (meaning you have to open up the lens to the right aperture between focusing and shooting) that require the photographer to make all the decisions.

I first picked up one of these old Zenits about a decade ago, after I started collecting old Soviet cameras. It sat unused for a long time, but I brought it back to life for my 35 project – though unfortunately the old Zenit decided to literally fall apart on me when I took it along to the Notting Hill Carnival in 2011. I picked up a replacement for £20 at a camera fair last year which works perfectly.

The Zenit’s a pretty cheap way to get into film photography, though it does take a little bit of practice to make the most out of it. Because it doesn’t have a meter, you either need to have a handheld meter or know enough about exposure to guesstimate what the right setting is.

Most 3Ms came with a version of the Helios-44 58/2 lens, a copy of the old German Biotar, or an Industar 50mm lens. These can be fantastic, once you remember how to use them properly (you can find out how to here). These lenses lack the modern coatings found of recent lenses, so can be prone to flare, but they’re still capable of lovely shots. A wide angle lens, the Mir-1B 37mm lens is nothing less than excellent, and the Jupiter-9 portrait lens is also criminally under-rated. Seeing as these lenses can’t be used on any other cameras (unlike the M42-mount models) you can get a couple of lenses pretty damn cheaply.

Before my original 3M fell apart in spectacular fashion while I was shooting the Notting Hill Carnival , I took it out to the Ace Café in north London, a 50s-style British café favoured by bikers and retro enthusiasts, for a meet-up of Eastern European car fans. On a bright autumn day, I loaded up a roll of the new Agfa Precisa 100 slide film – rebadged Fuji Provia. The colours were beautiful, not as rich as they might be with a modern, contrast-boosting coated lens, but with a dreamy retro feel.

The Zenit’s tough metallic body usually make it pretty robust – certainly, the second 3M I bought has had no problems at all; the first must have been put together on a bad day at KMZ. It’s a good camera to take out and about, though in very bright summer sunshine, the limited top shutter speed of only 1/500 means you can only use slow-speed film.

The following shots show just what the Zenit 3M is capable of – especially with a little patience and time to get to grips with its foibles. Check out some more in my Flickr set.

(Thanks to Lazslo Gerencser for the top pic – visit his blog)

Nice review and photos. The M39 SLR lenses are an overlooked bargain since they can easily be adapted to M42 and from there to many other mounts.

Α very nice camera, indeed. The Zorki 6 (which it was based on) is the best FSU rangefinder from a user point of view and this Zenit is the prettiest of all, incl. the latter M42 models. If you get a chance, don’t miss out on the first Zenit (or the Zenit-C), they are lovely little cameras, very jewel-like with certain limitations but they have a unique feel to them, being very close to the original Leica clones.

Nice blog but may I add a few corrections? The removable “Leica-style back” was, in fact, the removable FED 2 back; it took Leica about another 15 years to catch up. The Zenit chronology goes Zenit, Zenit C ( C is actually Cyrillic S – for synchronised), Zenit 3, predecessor of…Zenit 3M (M for Modern). I have them all, and use them regularly. The French call them “rustique”, Leica fanboys call them “agricultural”, I call them very good simple, cheap cameras, with excellent lenses. They make great gifts for your kids, nephews/neices etc. See the glow on a kid’s face… Read more »

The 3m was my first slr around 1968 but could never afford the extra lenses at that time, I was a apprentice plumber on not a lot of spare cash 🙁 Last year I was given some old Zeniths a 12 and a mint 3m with the 3.5 Industar lens,your review of the 3m has made me load it up with some Agfa colour film from the pound shop. A great article as well ++++

Thanks very much Martin… they are really great cameras. So simple there’s bugger all that can go wrong with them. I’ve only shot one roll with mine so far this year – I’ll have to get it out again as we head into the end of summer…

have got a zenit 3 tonight on fleapay,nice condition i hade one 30 years ago it was my first slr that one was bust this one looks good
tnx jeff just says ZENIT 3 ON MY ONE ..

Martin, you forgot the Kristall.

I got one, pretty much mint condition, but the film path and sprocket is so “fsu” that it rips film to pieces. No wonder is seems unused. Good thing it only cost $25.

Thanks for the great review, I recently picked up a UK export version of the Zenit 3M labelled Zenith 3 which as I understand is rare 🙂 . Have you come across any like that is it true that its rare 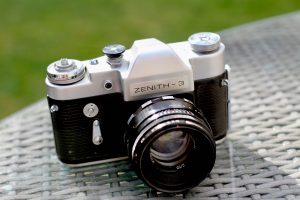