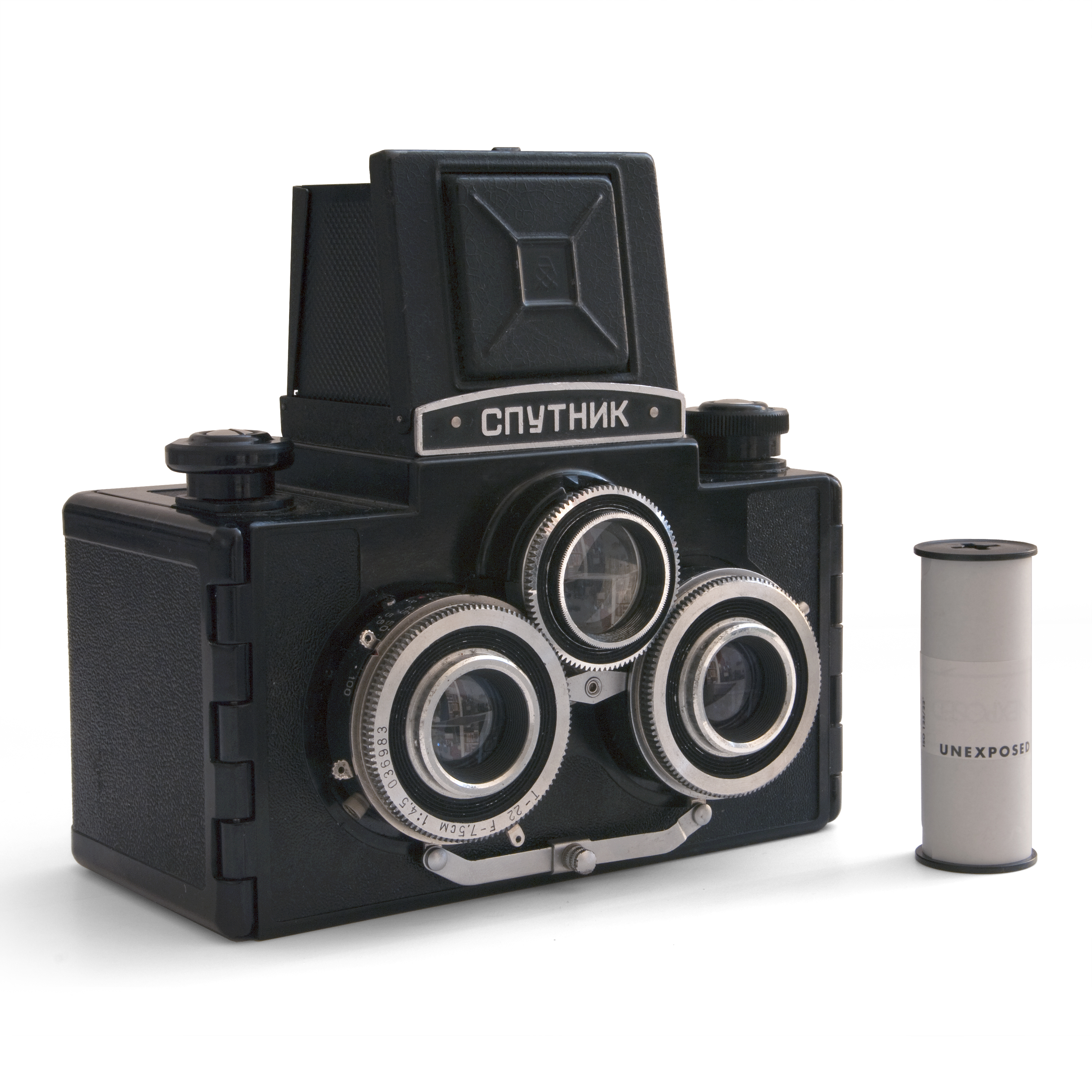 The golden age of analogue photography, camera manufacturing was dominated by two countries – Japan and West Germany. In the 1960s and 70s, the likes of Nikon, Canon, Olympus, Pentax, Leica and Rollei made everything from trusty holiday point-and-shoots to beautifully engineered classics wielded by legendary photojournalists.

There was another country that was also churning out cameras in their millions; everything from simple, no-frills plastic cameras to designs which pushed camera technology to the very limits. Many of them exude a kind of retro, Space Age cool today’s camera designers can only begin to dream of. That country was the Soviet Union.

The Soviet camera industry was born in the 1920s, after the tumult and chaos of the Bolshevik revolution. There had been no cameras built in pre-Communist Russia; instead, the USSR had to build a photographic industry big enough for this huge country from scratch.

The Soviets, separated from the capitalist world by their Socialist system, started things off the easy way – they cheated. The groundbreaking Leica rangefinder, the first stills camera to use 35mm movie film, was the basis of the first camera to be made in the USSR, the FED. Named after the then-head of the much-feared Soviet secret police – Felix Edmundovich Dzerzhinsky – the FED was a Communist clone lacking the Leica’s refined feel, partly thanks to the fact the first versions were built by relatively unskilled labour in a commune in Kharkov, now part of Ukraine.

But it did not take long for the country’s camera designers to start thinking outside of the box. In the middle of the 1930s, hundreds of miles away from Kharkov in the great northern Russian city of Leningrad, designers came up with a camera that’s the great grandfather of the Nikon or Canon digital SLRs we use today. The GOMZ Sport was, alongside the Exakta made in Germany around the same time, the first 35mm camera to use a mirror rather than a rangefinder – which theoretically made focusing a lot easier – which sat in a box-like compartment on top of the camera. It was a visionary invention by the company that would eventually become Lomo.

It was in the years after World War II that the Soviet camera industry truly gained pace. Part of the reparations paid by a defeated Germany included appropriation of industry, and this meant the machinery of the great lens works of Zeiss, which had been based around the city of Dresden, rolled eastwards on railway wagons. German design helped create enormous camera works in Moscow, Kiev and Leningrad. The Soviet central command economy demanded cameras in the millions, and that’s exactly what was produced.

Some of these 1950 and 60s designs are truly beautiful; KMZ’s Zenit C, essentially a FED or Zorki rangefinder with an SLR’s pentaprism on top, is a beautiful, elegant design; its descendent, the Kristall, is an Art Deco oddity of dull grey-painted chrome. The KMZ, FED and Kiev factories produced millions of simpler cameras – rangefinders like the FED 3 and no-frills Zenit 3M SLR – but also designs intended to show the wider world Soviet industry’s capabilities. KMZ’s Start, for instance, was aimed at professional photographers – it’s a huge lump of a camera, with a shutter release right next to the lens and a “knife” that cuts the film halfway through the roll, and a special lens design that kept the aperture wide open – vital for focusing – until the shutter was clicked. The Soviets scuppered the chances of making the Start a pro staple by forgetting to make any lenses for it other than a standard lens (apart from a massive 300mm telephoto), but it showed the secretive superpower was interested in making more than cheap knock-offs. This was the era of Sputnik and Soyuz, of Soviet jet bombers roaring over May Day parades, of Khrushchev boasts and Communist confidence.

Many of the 1960s designs were truly original and seemed made for a luxury market that didn’t exist in the USSR; Lomo’s Voskhod looked like something that would be used by the cosmonauts circling Earth, a rectangle of shining chrome and luxuriant leather. The Zenit 4 was a Soviet answer to complicated German cameras, and its offshoot the Zenit 6 was one of the first cameras in the world to come with a zoom lens; a mass of metal and glass that looks like a home-made missile launcher.

The Kiev 10 SLR from the late 60s was the first camera to have automatic exposure – beating designs from Japan and West Germany – and looks like something from a steampunk sci-fi film, framing a strange glass panel that serves as its old-school lightmeter. The Zenit 16, which followed in the early 1970s, looks like some kind of video game battle robot; its controls are mostly hidden underneath, and the camera’s rear door is hinged at the bottom – all quirks that set it apart from most other cameras. It’s an odd design, but one that is strangely pleasing to use – if you can find one that has passed the not-always-stringent Soviet-era quality controls.

At the same time as these curious, quirky cameras were being made, the Soviets were making – in truly dazzling numbers – designs that became the first-camera staples for fledgling photographers across the globe. Just one design – the no-nonsense Zenit E of the late 1960s and 70s – was built in the millions, and can be found in almost any camera shop, secondhand store or flea market from Valencia to Vladivostok. While many of these old cameras have seen better days, there are hundreds of thousands still in working condition; and they’re capable of great results for those wanting to dip their toes into the world of film on a very modest budget.  The Soviet Union may be long gone, but one aspect of their industrial might can be put to creative good use.

Check out my Flickr collection of pics taken on Soviet cameras, or some of the pics below, or my reviews of the Zenit E and the Zenit 3M.

Hunting dragons with the KMZ Fotosnaiper

Fascinating. An excellent read – thank you.

Thanks Amro – glad you liked it.

I had a Zenith SLR years ago, I have to say I found it far too clunky, however, I have really enjoyed their rangefinders. A FED 2 sits in thecupboard waiting for an outing.

Get that Fed out of the cupboard, Jon. Fed 2s are a really under-rated camera.

That Kiev 10 is BEAUTIFUL.

Ain’t it? They are batshit crazy looking, but awesome at the same time.

Very interesting article. I have long thought about getting a Russian camera or four. At today’s prices, it is kind of silly not to. Thanks for the write up.

No worries James. Start with a Zenit SLR or a Zorki rangefinder – cheap as chips.

Great article, I have 2 Zenits, a Zenit-B and a 3M. I love their quirkiness and they both take very good photos. But I think the lens from that era are really the unsung heroes. I have a Helios 40-1 in M39 screw mount (only fits my Zenit 3M), Industar pancake lens also in M39, and a Helios 44-2 in M42 mount. The 44-2 has been spread around all of my M42 cameras and it always results in some of my favorite photos. I need to try a to find a Russian rangefinder to add to my growing film camera… Read more »

…”The Soviets, separated from the capitalist world by their Socialist system, started things off the easy way – they cheated.”….
No, they didn’t ! But due to some commercial contracts concluded between Germany and Russia before the start of WWII, the German Leica became FED and later on: Zorki, and the German BMW “bike” became “Dnepr” and “Ural”. What happened after the war is, of course, another story……

Fascinating article.
It got me thinking though, what has since happened to the camera industry in Russia?

They didn’t make too many TLRs for some reason, in fact the only ones that spring to mind are thr Lubitels based on the Voigtlander Brillant.

They didn’t make too many TLRs for some reason, in fact the only ones that spring to mind are thr Lubitels based on the Voigtlander Brillant.

Talking about Russian vehicles,I once had a Moskovich van which I believe was based on the pre-war Opel Cadet, the engine being a BMW 1500. The most do it yourself vehicle ever.Everything accessible.It had to be!
As for their cameras,I have had several,and get a good one and stick with it. The Helios 44 is superb.